So much to catch up!

July Show
End of July was the IDS schooling show and the first time to have my trainer, JC, school us the day before and warm us up day of show.  It was the hottest most humid show weekend we have ever attempted and it was rough.  Riva ended up dehydrated the next week - coliced - several vet visits.  Needless to say, we will now be monitoring her water intake carefully at shows and giving electrolytes religiously during and following shows.

We showed First Level Test 1 and Training Level Test 3.  Focus for schooling was forward, forward, forward - along with focus.  We went thru First 1 several times in multiple rings and even worked on how to get from the warm up ring to the show ring.  On show day, I felt good about First 1, but very tough judge.  JC said she did not want to see the comment 'needs energy' on my test - no problem there...we have several canters moments which should have been trot, several trot moments that should have been walk.  But it was forward!  Score was 55%. 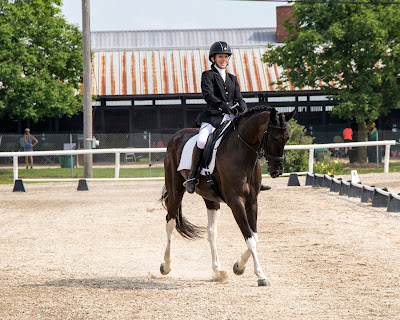 August Show
Two weeks later, we attended the Noblesville schooling show and again entered First Level Test 1 and Training Level Test 3.  First one went much smoother this time around with a score of 67.407% and 2nd place.  Another super hot humid day (electrolytes were used!) and a long wait between tests, left Riva and I not quite on our game by the time our second test came around.  I had a major fail, and a first for me - Riva picked up the wrong canter lead and I counter cantered her the entire right lead canter work.  It was so smooth and balanced...I didn't realize it until my daughter told me as we exited the ring.  Still kicking myself for that one...but, the judge did write 'Very nice counter canter' on my comments :)  Ended with a 61.59% and a 5th place. 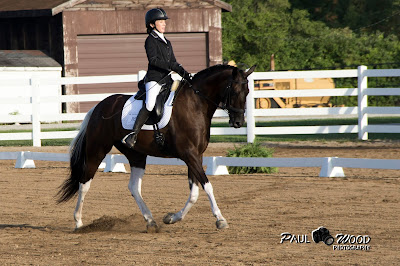 While I qualified for Training and First Level Championships for IDS, we ended up moving that weekend and I decided not to compete - would have been more stress than I could handle!  So...we bought a farm!  Farm is my term - house and barn on 5.2 acres.  We casually started looking over the summer at properties in our area just to see what we could find.  I think we looked at 5 properties - nothing was right until this one.  We made an offer - seller accepted - we listed our house - had an accepted offer day two it was listed!  What a whirlwind it has been ever since! 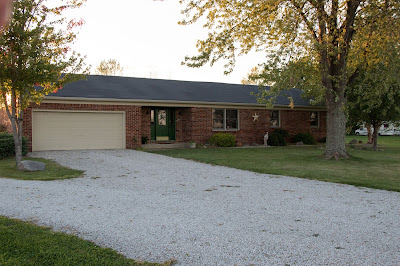 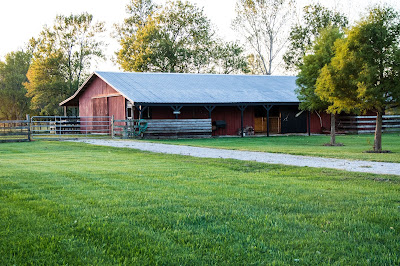 House just needs some minor changes to make it our own, but they will wait - barn and property renovations began on day 2 that we moved.  Outdoor dressage arena construction will begin next Monday and interior barn work is well under way.  Goal is to bring the horses home soon!
Posted by Kelly at 1:18 PM 6 comments: