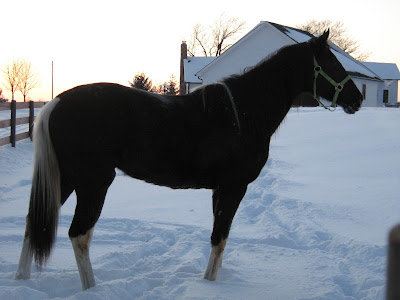 Riva as a yearling
Though we don't have any snow here just yet - I know some bloggers are having a white Christmas.  Regardless of the weather, Merry Christmas to all!  Enjoy the holidays with loved ones.﻿
Posted by Kelly at 7:29 PM 4 comments:

Looking Back One Year 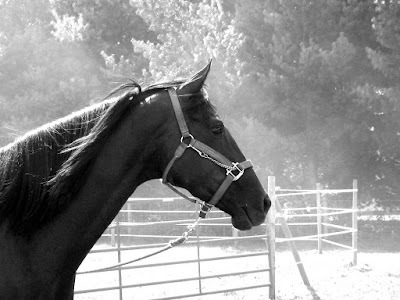 First of all, I am very bad at keeping up at taking pictures of Riva.  I tried to find a pic from December of 2010, and September was the closest I came.

December of 2010 - I had Riva at my previous trainer's barn from mid-Oct. to mid-Nov. of 2010.  So in December, we were trying to maintain the progress gained while away at training.  I was finally able to lunge Riva on my own, and she was responding to body language and softer voice cues.  Riding,,,,still issues. 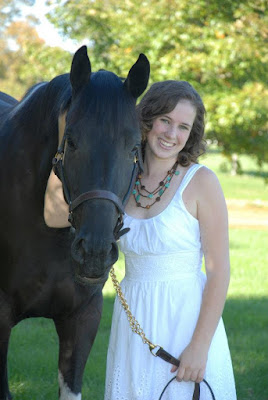 *   Riva is a pro at lunging now.  I can lunge her in our indoor alone, or with another horse lunging and another being ridden.  I have control of her and she respects and responds very well on the lunge.

*  Ground manners are much improved.  Her pushyness is almost 100% gone - but she will try it with a handler that isn't used to her.

*  Riding gets better every ride and I could not be happier with this.  I am once again having fun on my horse.  I know my husband is happier, since I don't break done in tears every other ride!  My confidence in my ability has increased 200% or more over the past year.  I can now encourage Riva with a dressage whip - I no longer ride in spurs - and she is responding.  The very few times she balks, I can handle it and get Riva moving out with energy.

I have several people to thank for the progress this past year:

* First of all, my lovely, talented ,soon to be 18 year old daughter!  When Riva got dangerous early this summer - ie, rearing, bucking, twisting - all at the same time bit - Alexis got on and worked Riva thru the issue.  Every time Alexis gets on Riva now, which is rare, with her being a working student, I see how a good rider can get Riva looking like a dressage prospects.

*  My new trainer - for putting me on a schoolmaster dressage mare, a gaited horse, and a very opinionated draft cross, and teaching me how to ride all over again.  I was doing so many things wrong, and she patiently helped me thru each and every one.  I have learned so much from her in the short time I have switched to taking lessons with her.

*  My husband - who has talked me thru being on the verge of giving up on ever being able to ride Riva, many times.  Who has reminded me countless times that I am green, Riva is green, and we will get better.  He is the the one who tells me to look back at our progress and remember how far we have come.

...and I hope the progress never ends!  One of the best things my trainer/bo did last week was put me on one of their gaited horses.  When I arrived at the barn last Friday evening, she said she had a great relaxation exercise for me to try.  She told me to put a barebad pad on BJ - aka very cute black and white Rocky Mountain Spotted Horse - and his bridle, and hop on.  The only warning she gave me was if I didn't relax right away, I would fall off.  OKAY...

Let me just say, the first lap was way different than any ride I have ever experienced!  I have never been on a gaited horse and had not a clue what to do.  My husband stepped in the arena and stopped BJ after one lap - my plan was just to run him into a wall :)  Once BJ was standing still, my trainer gave me a few instructions - how much rein to take up, how to sit, how to ask for walk, then faster walk, how to stop, etc.

So we started off again in a much slower gait.  It was amazing!  I loved feeling his back move and the smoothness of his gait.  I spent quite a long time at the slower walk then moved up to a faster walk - I never let him totally go- maybe next ride.  But what I learned from that ride I don't think I could learn on any other horse - how to totally relax and move with a horse.  How to continually breathe deeply with emphasize on the exhale.  Priceless!

Saturday is normally Riva's 'day off work'.  My daughter, Lex, was home for the weekend from her working student position, and asked if she could go out and ride Riva.  She has been riding several young horses at her new position and was anxious to try out her new skills on the Diva.  Well of course I agreed she could go out and ride.  Since Saturday nights are date nights for my husband and I, I didn't go out to watch.  I received a call right after her ride with a full report, though!

Lex focused on forwad - if Riva did not go forward she got a quick tap with the crop.  Lex was thankful I had already started laying the ground work with this.  As early as this past summer, the touch of the crop would send Riva into bucking fits.  No more - she is growing up and realizing the crop is a much stronger leg on.

Lex worked Riva in a very forward trot for most of the ride - threw in lots of direction changes and circles.  Riva offered canter several times and Lex rode her thru it.  She rode her with two other horses working in the areana, with zero issues.  Lex said it was the most fun she has ever had on Riva and had to tell herself it was time to quit and cool her down.

Sunday night I went out to ride and immediately heard from my trainer/bo how fabolous Riva looked on Sat night with Lex riding.  No pressure for me to ride her well, hmmm.  I got on and really focused on relaxing and breathing deeply.  I warmed her up with a nice rhythmic swinging walk - concentrating on keeping my hips open, legs relaxed and back, toes over my knees and pointing forward, and staying light in the stirrup.  I exhaled and with a light leg aid asked Riva for trot - and she went!  Not only went, she trotted out very forward - ears pricked and focused.  I was able to hold the reins with very little pressure - Lex's trainer says you should be able to hold the reins like they are ribbons about to break and I never understood what that meant until that ride.

We spent the remainder of the ride much the same as Lex discribed her Sat ride - forward mare with a happy attitude.  Riva even offered a left lead canter and I rode her thru it.  I was thrilled!

Monday was farrier day - he was most impressed with the growth in Riva's front feet.  This past shoeing was an experiment in stretching to six weeks between visits - we had been on a four week cycle.  All four shoes stayed on the entire 6 weeks!  Will stick with this timing as long as it works for her.

After Riva's feet were finished, I tacked up to ride.  Monday's ride was just as successful as Sundays, maybe even more.  I actually felt my heels bouncing down as she trotted - something my trainer has been working on me being able to accomplish and feel.  And Riva just seems...happier.

I never would have believed that my tension and or relaxation would cause such changes in Riva.  When I relax, she goes forward - when I tense up, she balks.  It seems so incredibly simple.  The softer I ask, the better she responds.

First off, the Corneal Ulcer.  I HATE eye issues - only thing medically that makes me squeemish.  Thankfully, I have a wonderful husband who makes it his job to doctor the horses when it needs done. Which for the past week has included driving out early mornings to put two different eye ointments in Riva's eye and give her Banamine paste.

Last Sunday, we arrived at the barn to find Riva's right eye swollen almost shut, draining, and completely cloudy.  After panicing just a bit...we started calling vets to have an emergency visit.  When Riva was a yearling, she cut her eyelid and we waited a few days to have a vet out to see her.  The vet told us to never wait to call about eye injuries.  Of course, this time was much worse.

After trying our first choice vet...out of town for Thanksgiving weekend.  Second choice vet...Dr. on call was heading in to the clinic for an emergency c-section on a dog.  Third choice vet...he called us back and was out in about an hour.  He examined Riva's eye and determined it was a Corneal Ulcer caused by an injury.  He gave her a Banamine injection and treated her eye with two different ointments.  He was confident it would heal completely with treatment, but insured we did the right thing by not waiting to have it seen.

So, a week later, the swelling and drainage are gone and the cloudiness is clearing.  We are done treating with Banamine and one of the eye ointments.  The rest of this week, she needs just the one ointment twice a day.  Very relieved!  No pictures - sorry.

Next, progress.  I am starting to feel everything come together with getting Riva forward.  I can not say enough how working on a Dressage Schoolmaster is improving my position and understanding of riding in general.  My trainer/BO is patient and wonderful and works very hard to help me understand the mechanics of riding - how my position, relaxation, posture effects the horse.

Because of the lessons, I have also been doing a lot of reading and research in my quest to learn and understand.  While there is a lot of crap on-line, a couple of articles I found were exactly in line with what my trainer has been teaching.  I had a light bulb moment after reading it in print and seeing it stated a different way.

Several people commented on and asked for the website link for the lovely horse hair necklace that was given to my daughter.  So...here is the link!


I just went to the site and oh my...I want!  Really beautiful pieces.  I can vouch for the quality of the craftsmanship that goes in to this jewelry.  Lex's necklace is stunning - the photo does not do it justice.  I am glad I visited the site, as it gave instrutions on care.  The only thing I think the company should do differently is to include a note about how to care for the jewelry.