Last Saturday was our second show of the season at HHP in Edinburgh.  I was excited to go to this show even more after seeing the list of competitors.  First, I saw that the black mare my daughter took to Event Camp was on the list with her new young owner and second, Riva's breeder's young daughter was also going to compete.  Her breeder had not seen Riva in person since she was a yearling!  And, I already knew Austen of guineaforaguinness was going to be there competing her handsome boy, and it is always great to see them! 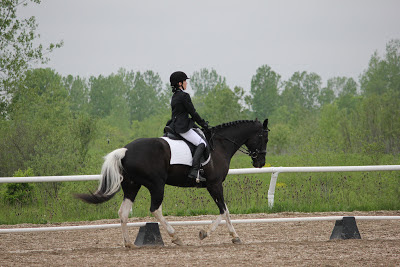 Hauled down on Friday evening and the rain was intermittent all the way there.  The showers did let up and we got in a productive school in the ring before the skies opened up again.  Riva was her normal up and very alert on Friday evening, but did her best to listen.  Only one spook - she did a drop and slide move as we were cantering past the opening at A, just as it was starting to rain.  Not sure what that was about...but I stayed on!

Husband and I enjoyed a Mexican dinner and beverages at our fav pre-show place in Edinburgh - won't say for the last time because I really would like to come back for IDS Championships in October. 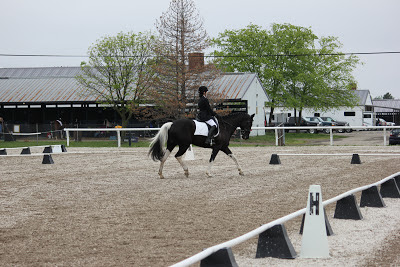 I was 'trainerless' for this show, since my daughter had to work, but my husband is fantastic at shows and much appreciated!  I had planned to ride my tests without a reader, but our BO's daughter happened to be there and kindly agreed to read for me.  I know the tests, but I find I can concentrate on each move so much better when I am not thinking 2 moves ahead.

Training 3 went very well!  Our only bobble was the very first movement - entry and halt...well really just the entry!  The areana was set up as a short dressage court and I noticed it as we rode in around the perimeter, waiting for the judge to ring her bell.  As we turned at A to enter, Riva caught site of the different looking areana and seemed confused and then wanting to veer right then left, right then left.  We got our act together by X and halted fairly square.  After that, every move went smoothly.  After getting a 5 on the first move, the rest were all 6's and 7's, even one 8!  We received a 67.2 - was very happy with this!  Large open class, so we received a 4th place with that score. 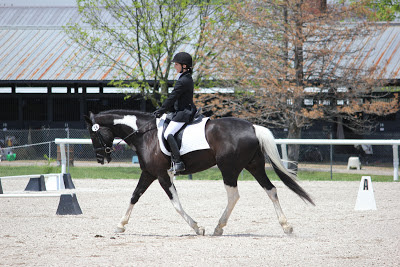 After a rest and brief school, we headed in for Training 2.  All was going so well, until the right lead canter - same place we had trouble at the last show.  As we rounded the corner to canter, Riva started shaking her head and trying to buck.  Got the canter, then lost it on the circle with more head shaking and threatening to buck.  Recovered on the long side and finished the test like nothing happened.  Still can not figure out why this has happened in the same spot, two shows in a row.  So despite getting two 4's for that canter transition and canter circle, we ended with a 63.21and second place. 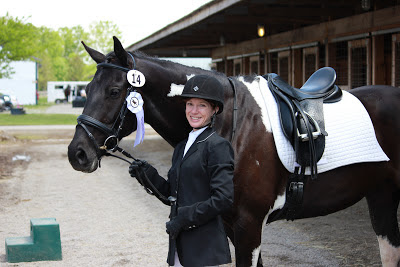 Special thanks to Jen of cobjockey for cheering us on and taking photos of us!  So good to see her.  Also to Austen for hanging around long after she was done competing to watch our second test!  I did not say goodbye to either of you, because I will see you all again either in KY or IN!  Great day, great show, I am blessed. 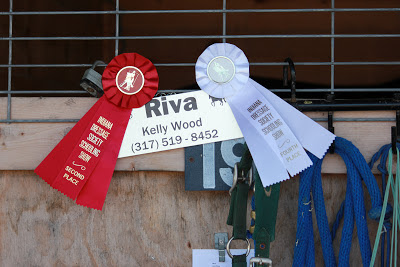 Not Riva - but this is how she looked last night
Riva had her first ever Colic episode yesterday evening.  We have dealt with Colic many times over the years with Cheers, our OTTB.  The first place we boarded him, we would frequently get calls to come to the barn and would spend hours walking him until the pain would pass (along with large amounts of poo).
First off, Riva has been kept inside the past few days due to a severe case of scratches/mud fever/dew poisoning (ie fungus) on the white parts of her legs and neck.  Our weather has been so rainy that even with our well drained pastures, there is lots of mud and very wet grass.  Riva started with just a bit of fungus on her back heel bulbs one night and by the next night, full blown up her legs.  We started treating her with AG Silver wash and powder and keeping her inside - with indoor arena turn out.
Of course, Riva has not been happy with this arrangement of not going out with her mare buddies.  I still rode every night - fortunately, no lameness with the fungus.  On Tuesday night, we switched to a new treatment for her legs and neck - Tomorrow Dry Cow which is actually a treatment for mastitis on the advice of several boarders at our barn who have had success with this product.
Last night, I arrived to a kinda sleepy looking Riva.  Her legs already looked better, she had eaten her dinner, but had lots of alfalfa hay left in her stall (which she was not eating- and she normally hovers this).  I got her tacked up and went out to ride.  I took her around the galloping track a few times to warm up and then schooled in the outdoor dressage arena.  She was her normal self - worked on transitions and halts, lots of canter circles and trot loops, even schooled a few walk to canter transitions which we have just started working on.
I walked her out around the galloping track and hopped off to walk her in.  When I went to run my stirrups up, I noticed she was heavily sweating - sweat was dripping off her belly and chest.  It was warm yesterday, but she is body clipped and I had thoroughly walked her out.  I took her inside and got a bucket of cool water and towel to sponge her down.  She started pawing and trying to turn in the crossties and just not looking right. Took her outside to hand walk and she laid down as soon as we reached the grass.  I yelled for one of the boarders to get our barn owner to draw up some Banamine for me - my horse rarely lays down (I have seen it exactly one time in 5 yrs, early one morning in her stall).  The BO's daughter took her temp - normal, listened for gut sounds - none, and gave her 12 cc's of Banamine and I proceeded to walk Riva.

After 20 minutes, she checked her again and Riva seemed a bit perkier with some gut sounds.  I kept walking and within 10 minutes, she laid down again.  After another half hour of walking, I tried putting her in her stall and she peed and pooped a normal looking pile.  But right after that, she started pawing and circling, looked distressed.  She would stop and stand with her back legs and front legs way under her body.  I put in a call to my vet.
Within 10 minutes the vet called back.  After hearing the report, she asked if I could get her to the clinic.  I proceeded to cry and tell her my husband is in KY and I would see if BO could drive us.  My wonderful BO and her daughter dropped everything and transported Riva and myself to our vet.  During all this, I had called my husband - who called youngest daughter - so Lex met us at Dr. A's.  When we reached the vet office, Riva calmly walked off the slant load, step down trailer (she has only ever been on our ramp straight load trailer) and right in to the stocks to be examined.  Knew she  was distressed because normally she would take some coaxing for any of that!  Vet had the bucket of mineral oil waiting and the sleepy drugs ready to go.
After siphoning out lots of gas and liquid, Dr. A tubed her with mineral oil and gave her a shot to stop the stomach spasms and relieve the pain.  Riva must have started feeling better quick because she wanted to have a discussion about getting back on the trailer.  Lex convinced her she did want to get on that trailer - and back home we went.

Dr. A gave instructions to remove all food and hay for the night, just water and if she seemed normal in the morning,g to turn her out.  I coated her legs  down with the Dry Cow and stared at her for awhile.  She was searching her stall floor for hay scrapes and her eyes looked bright again by the time I left at midnite.

BO texted me this morning that Riva pooped before turn out this morning and was happily running about her pasture this morning with happy bucks thrown in.  I am longing to sit and just watch her all day - but have to work to pay off the vet bills!

Thankful today for my awesome BO and her daughter, who had spent the previous evening at Purdue Vet Hosp with one of their own horses, my sweet youngest daughter for meeting me at the vet office late last night, for my wonderful husband for talking to me on the phone all the way home last night to make sure I didn't fall asleep.   I am truly blessed!