Show # 2 of the 2015 season was first weekend of June - combined schooling show at Foxton Farm.  While I have been a show mom at this venue several times, this was Riva's first time at Foxton.  I don't know if she just loves to travel or she has way more trust in me than I think, but she barely blinked an eye when she walked off the trailer and into a strange barn/stall. 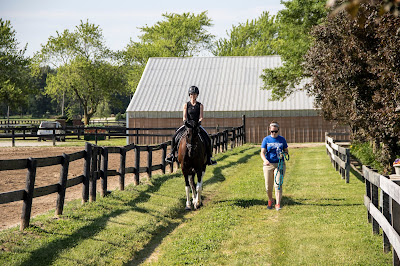 Good school on Friday evening - Riva was up and forward.  We focused on bend and getting deep in the corners, geometry for the 15 meter circles, aiming for some show of lengthening in the trot diagonals and canter down the long sides for First Level Test One - we have a long way to go on both of these movements. 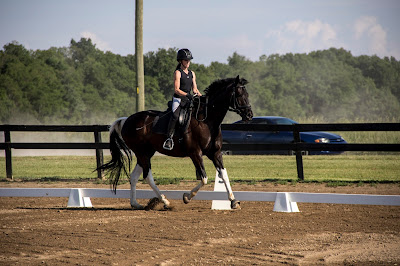 Saturday, our First 1 ride time was before TL Test 3.  Warm up was a bit crazy as there was just one warm up ring for dressage and stadium.  Riva feeds off jumper energy so I don't mind this set up as long as riders are courteous - call out jumps, etc.

First 1 was a definite improvement over our first attempt in April and our score reflected this.  We scored a 62.778% for a 3rd place.  Still very little lengthening shown and we lost a lot of energy once we stepped in the ring. 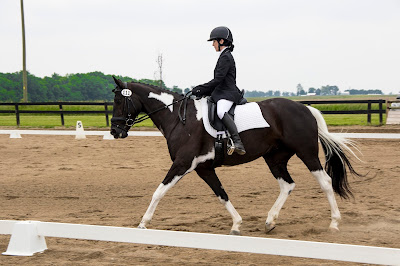 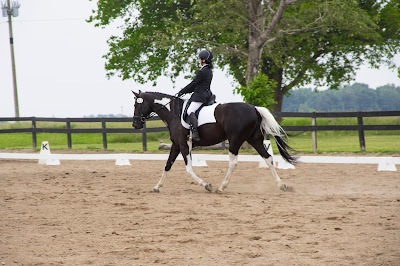 Always grateful to my trainer daughter and photographer/videographer/groom/do-it-all horse show husband.  Without them,  I would not have as much fun and talking it all over with them always helps me put everything in perspective. 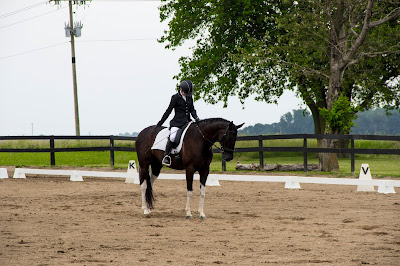 Since moving back from KY, I have taken a once a month lesson with JC.  I think 3 lessons were on one of her client's horses - a fabulous 3rd level Arabian stallion, and the rest on Riva.  This past Saturday, I had one of those life changing riding lessons on Princess Diva and we have turned a page.

The lesson started normally - Riva being behind my leg, leaning on the bit, just giving the minimal effort.  After trying to work thru this, JC had me hop off and did a bit change.  While the bit is not dressage legal, she wanted to take away the leaning on the bit to see what happened.  Prior to this, JC had believed Riva biggest problem was a weak left shouldar and we had been focusing strength building on this area.  After the bit change, there was a switch to this horse has a head/neck/bit connection issue.

We spent the rest of the lesson getting Riva responding to extremely light leg pressure to walk, trot, canter - and to keep the gait until instructed.  I was also told I had to limit my use of the whip - not that I was not to use it, but when I did use it - I had to mean it.  I think Riva quickly got the message that life as she knew it was changing.

All week - I have been very consistant in following how JC instructed me to ride...and the difference is unbelieveable to me.  We also made a bit change - still a legal dressage bit, but new to Riva.

Next show is last Sunday of July.  For the first time for us, JC is going to school us the day before at the show grounds and help with warm -up, if her schedule permits.  Here's hoping I will be better at posting in a more timely fashion our show re-cap!